You are here:
Home> Samoens> Samoens News> Grand plans in The Grand Massif

Grand plans in the Grand Massif 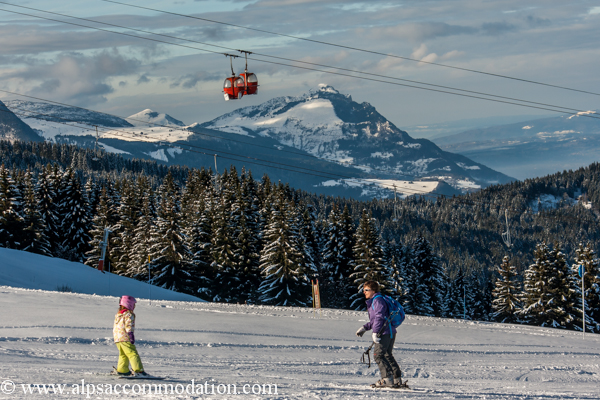 The winter season is now fully upon us. Fresh snow has been falling this week between bluebird days and there is more of the fluffy white stuff forecast from Friday. These are exciting times, but not just because of the snow. Of course the snow is what it’s all about right now, but here in the Alps Accommodation office something else has got the team abuzz.

Just recently I had the pleasure of meeting the general director of the Grand Massif Resort, Mr Pascal Tournier. Mr Tournier and I discussed some of the future plans for the resort, and I must say there’s a good reason why it’s called the Grand Massif. While some plans are merely in their beginning stages, others are almost complete. Either way, Mr Tournier and his committed team are going to be very busy ensuring the bright future of our resort.

A large majority of the work and investments made last summer went into improving the quality of the pistes and longevity of the snow. Snow canons were installed, reservoirs were expanded, and of course many of the slopes were covered in rich topsoil to encourage growth, which in turn ensures what snow there is will last. In keeping with this theme Mr Tournier confirmed that by next season 2015 more snow canons will be installed, further boosting the resort’s snow-making capacity. The main focus will be on Morillon, specifically the two runs that return down to village level. Just think! Guaranteed ski-in ski-out! That’s fabulous news for Alps Accommodation guests staying in Morillon.

The slopes of Vercland are also tipped as priority for snow canons, again ensuring ski-in ski-out capability. This is actually just a small part of a much grander plan for the area. Not only will there be snow canons on the runs down to Vercland, but at altitude there will be another water reservoir to ensure their supply. And most importantly these new, perfectly snow-covered runs will be winding their way back down to the brand new chairlift that would have replaced the ancient red bubble of bygone years! Great news for guests at Alps Accommodations’ Chalet Maya just 100m away. As much as the “M&Ms” as I like to call them have great character, it is definitely time for them to go and Mr Tournier said that by season 2016 the plan should be complete. Mr Tournier also confirmed that the rumours you may have heard, about pistes that continue all the way back down the mountain to L’Etelly where a new telecabine would be situated along with a large car parking facility, are not actually rumours. While the immediate focus is on replacing the Vercland telecabine at its current location, the L’Etelly plan is in the pipeline and may come into fruition before too long. Just imagine - queues at the GME during peak holiday times halved!

Two other ideas in their basic stages of developmental planning are a mechanical link between Sixt and Flaine, and a new link between Morillon and Samoens. The Sixt-Flaine link really does seem to be just an idea at this stage. Mr Tournier did say however, that should it go ahead then Sixt would be looking at getting its very own telecabine with a further one or two chairlifts linking up to Flaine. The Samoens-Morillon link would involve development of the Combe de Coulouvrier under the current Lanche lift and addition of two new chairlifts linking the two stations.

And finally – yes, it’s hard to believe but there is more – probably one of the most talked about points of late is the “FuniFlaine” sky tramway that would link Magland in the neigbouring Arve Valley to Les Carroz and Flaine. The 6.4km long system with its four individual entry/exit points would climb a total of 1350m between Magland and Flaine and transport 2000 people per hour one way. While this seems enormous and perhaps a little daunting for those of us in the tourism industry in the Giffre Valley, the project does have its benefits. The “FuniFlaine” would definitely become the starting point of choice for skiers and snowboarders further down the valley, and I daresay it would for the Swiss crowd travelling up from Geneva each weekend too. I don’t know about you, but personally I like the idea of deflecting some of that traffic away. And if it means leaving the slopes here just to the locals and holidaymakers to our valley, then no complaints from me! The financial decision on this project is being made in July of this year and should everything go ahead the funicular is set to be in place by season 2018.

And so Mr Tournier and his team at the Grand Massif have a number of busy years ahead of them. Improvements have already been made, soon others will be started, and then even more will follow but speaking with the general director he certainly seemed quietly calm and confident. All in a day’s work I guess. Here’s to a bright and grand future!!