You are here:
Home> Samoens> Samoens News> The Changing Seasons of Samoëns

The Changing Seasons of Samoens 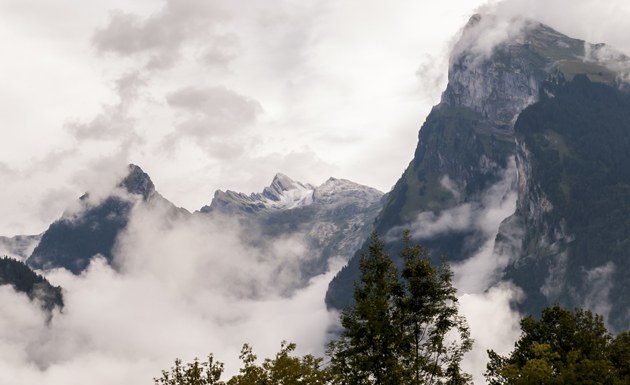 It’s been two weeks since the schools went back for the start of the autumn term and in that time a definite change of season has begun to occur. Autumn in Samoëns is one of my favourite times of year. The transition from the warm summer months to the cold of winter makes for a glorious sight here in the mountains. What become crisp clear days begin in a shroud of mist; rays of light only breaking through the grey curtain as the sun slowly climbs into the sky. Some days the sun doesn’t break through at all. Light rains fall and the damp, misty veil adds an element of magic to our mountainous surrounds.

Yesterday was one such day but rather than committing myself to an uneventful day indoors, I donned my rain jacket, a good pair of hiking shoes and headed out the door. The temperature was cool but comfortable, and the air was fresh and clean. As I looked around the quiet hamlet where I live there was neither sign nor sound of person or creature, except for the donkeys in the field by my house. Like me, they seemed to barely notice the rain. They were just happy to be out of doors, munching away at the lush, green pasture and picking up stray apples that with the approaching autumn had begun to fall from the trees. Leaving my home (and the donkeys!) behind me, I headed up into the mountains hoping to find some of my own seasonal produce. 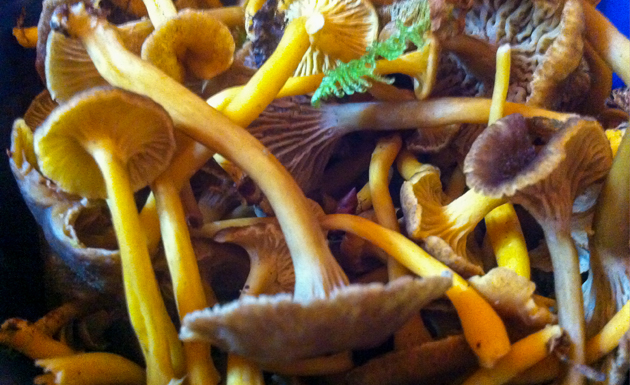 My destination was a section of forest above La Rosière, on the south-facing slopes overlooking Samoëns. Here a meandering path climbs through dense forest that at this time of year is ideal for picking ‘chanterelles d’automne’- tasty wild mushrooms. In and around Samoëns there are a number of secret mushroom-picking spots, all of which provide a beautiful somewhat Tolkein-esque journey through the mountains. The scenery yesterday was especially magnificent, the light rain only adding to the mystical charm of the quiet, unmoving forest in which I walked. Autumnal colours of yellow, orange and deep browns were beginning to emerge and a warm, earthy smell played in my sinuses. The damp leaves will soon cover the entire forest floor - ‘swooshing’ sounds underfoot another of my favourite signs that autumn has come.

Yesterday it seemed that autumn had certainly come, providing me with a great big stash of chanterelle mushrooms! It seems these tasty little treats like it best where mosses abound under cover of blueberry bush. So with bag in hand I scaled the green banks of the forest, fossicking for the golden treasures whilst enjoying the odd handful or two of sweet blueberries. The berry-picking season is late this year due to our slow-starting spring, and as such there are ample wild fruits still to be enjoyed. Blueberries, raspberries, even the odd strawberry can still be found on many of the hiking trails in and around Samoëns. 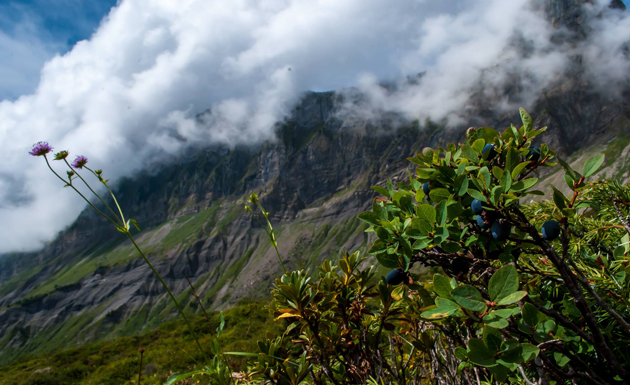 Yesterday, however, was all about the mushrooms. Having filled enough of the bag to share some of my bounty with friends, I headed back to town. The rain had stopped by then, and skies were starting to clear. It was a sight that stirred excitement in my belly, and not only because I’d be able to enjoy pan-fried, freshly picked mushrooms ‘al fresco’ style. As clouds parted at the end of the valley a 3096m summit of the Buet was revealed - dusted white with snow!

And so it seems a definite change of seasons is upon us here in Samoëns. With cooler temperatures and warmer colours, there is no doubt that summer is now behind us. Autumn is here and it’s fabulous to see that with it come the first snows, albeit on the highest mountain tops. Samoëns in Autumn, one of my favourite times of year, is proving once again to be a beautiful (and fruitful!) place to be.

Alps Accommodation operates year round and a number of specials for the autumn season are currently on offer, including the coming October half-term. If you’re interested in seeing our beautiful mountain region during this quiet and peaceful time, be sure to get in touch!