The Enduro World Series and Mountain Biking in Samoens 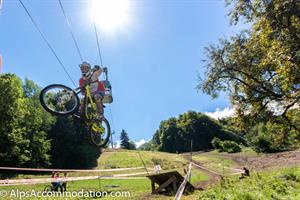 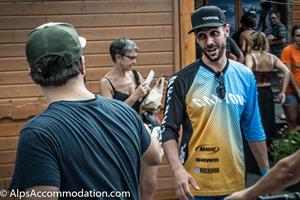 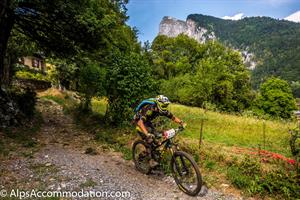 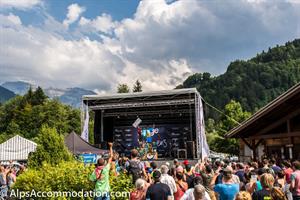 Samoens and the Grand Massif played host to 3 major mountain bike competitions this Summer enhancing it's growing reputation as a top alpine mountain biking destination and putting on a spectacular show in the process!

The biggest and highest profile of these events, the Enduro World Series, took place in July soley based on the tight, technical trails of Samoens. Enduro racing is a new and hugely popular format of racing which sits between the established disciplines of cross-country and downhill. It consists of several timed, predominantly downhill, stages linked by liaisons which are untimed, but have a time limit – so you can't enjoy the views for too long! For any motorsport fans out there, the format is very similar to that of stage rallying. This type of racing has become hugely popular due to the fact it closely resembles the type of mountain biking the average mountain biker does every single weekend – A big day out with some mates, getting to the top whatever way you can, and coming back down as quickly as gravity and skill will allow. Followed by a beer!

It just so happens that Samoens and it's wonderful terrain lends itself very nicely to this discipline and the organisers of the Enduro World Series have recognised this. The series consists of 8 rounds throughout the world – New Zealand, USA, Spain, Italy and Whistler in Canada to name just a few. That tells you all you need to know about the standard of the mountain biking on offer in Samoens and the Grand Massif.

So, on 18/19th July the Enduro World Series rolled into Samoens. Around 350 competitors in total amongst them some of the biggest, most influential names in the sport – Fabien Barel, Nico Vouilloz, Jermone Clementz, and Britain's Tracy Moseley. And the great thing about this up and coming sport is that you and I, with our rattling steeds, and brute force technique can join the elite on the same trails, on the same day. It was a tense and exciting weekend of very close racing, a thuderstorm thrown in before the start of stage 1 adding to the drama! The men's race was eventually won by 20 year old American wonderkid Richie Rudd while Tracy Mosely took the honours in the female category. Stage 2 of the race started at the top of the Grand Massif Gondola and ended in the car park at the bottom - to give you an idea of the talent and speed of these riders – if you were to step onto the Grand Massif Gondola at the top station, just as the fastest rider set off, you would step off the gondola to be met only a few seconds later by the same tired and most probably foul smelling mountain biker. Needless to say, spectating was fantastic!

A couple of weeks after the Enduro World Series, the glorious pine forests of Les Carroz played host to a round of the Coupe de France, France's premier downhill mountain bike championship. Over 250 riders battled it out over the weekend on a brand new high speed track running the length of the Keduze gondola. Huge jumps, car sized rocks, and eye wateringly fast sections, together with the best riders France has to offer made for more spectacular viewing. What's more, if you are brave enough, the downhill track has become a permanent part of the ever expanding and increasingly impressive bikepark in Les Carroz, so get over here and compare your times to France's best!

Only last weekend, Morillon played host to a round of the Coupe Rhone-Alpes. Yet another 200 entrants put on a fantastic spectacle under perfect blue skies. Many locals and holiday makers alike were spotted enjoying a sunny picnic, taking in the views, and watching the action unfold!

There have been many new trails and improvement in the Grand Massif this Summer, mainly in Les Carroz and Samoens. Samoens has gained a few new trails – notably a new trail from the top of the Tete des Saix down to the Dahu lake which links up to the Parements trail. This gives you an exhilarating 1500m vertical decent back to the Grand Massif car park! Samoens, with the exception of a couple of easier runs, is best left to more experienced (some would say mad!) mountain bikers. For a bit of a warm up, or for those with less experience, jump on the Chariande Express, and roll down into Les Carroz where a brand new green run is quite honestly brilliant. The trail starts at the top of the the Keduze gondola and twists and turns picking a gentle path through the forest to the base of the gondola. Over 5km in length, it's a wide and forgiving track built very well and is truly rideable by anyone with a decent level of fitness.

So there we have it! The worlds best have visited Samoens and the Grand Massif this Summer, and they have loved it! You certainly don't have to be amongst the elite to enjoy mountain biking in this area, we have everything from a gentle pedal and picnic alongside the river Giffre, right up to the biggest baddest trails you can imagine, and of course, everything in between!

If you haven't yet booked yourself a holiday in Samoens this Summer, why not? It has been, so far, one of the hottest, driest and all round best we've had. We've got lots of special offers available for August and early September so come and join us!