You are here:
Home> Samoens> News> Going out with a bang!

Samoëns winter season 2015 – going out with a bang! 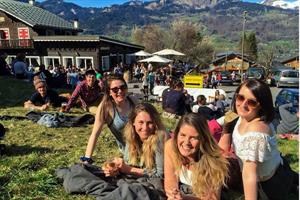 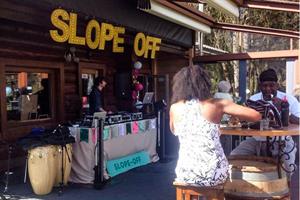 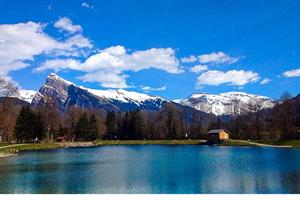 We can’t believe it! The end of the Grand Massif winter season 2014/15 is here. But what a great season it’s been. Sure, things may have got off to a slower than usual start back in December but there was still plenty of Christmas cheer and winter fun for everyone. Then of course the New Year arrived and with it the big snow! We all knew then that the season to follow would be epic, and epic it has been right until the very end.

The final countdown has begun and we’re still enjoying great skiing and snowboarding right cross the Grand Massif resort. In fact up until only two weeks ago you could still ski right down to Morillon village. And just last week it was powder days all round in Flaine. Plus, for most of this final week of season the weather has been superb - sunshine, sun tans, t-shirt skiing, and even afternoon sun-baking (or swimming!) at the lake. Oh we do love it here in the Grand Massif, especially at this time of year. It really is the place to be to end your winter season of fun.

This year’s end of season vibe has been made even more special by a great first-time event that we hope will be returning to Samoëns and the Grand Massif for many seasons to come. “Slope-Off”, our very own alpine music festival, has provided slope-side beats, late night grooves, comedy gigs, secret forest parties, sunrise hikes to epic destinations and much more all week long. If you’re lucky enough to be out here this final week of the season then don’t miss Slope-Off’s official closing party. This Saturday from 2pm until 2am the Cirque du Fer a Cheval is where it’s at. Kickback and get groovy with George Young, Kim Slade, Sanderson Jones, Alpine Milk, The Redstars, Normanton Street… and if that’s not enough for you then how’s about Laser Battle House Party from brothers Kelvin Andrews & Danny Mekanik?!

Of course Saturday on the slopes is set to be a great one too as the “Septi Contest” returns once again to Samoëns 1600. This is THE end of season event - a day of absolute fun and hilarity. Live music and DJs, a mouth watering BBQ, the Ice Bar, a ski and snowboard test day – it all awaits. Not to mention the giant waterslide! Get yourself a team together and attempt to cross what is possibly the biggest water plane in France on your skis, or your board, or whatever you like really. The crazier the better! Participate to win some great prizes or just rock up and enjoy the day because good vibes and great times are assured for all. And as the slope-side shenanigans start to wrap up for the day be sure to head on down to La Reposette for the Septi Contest Party! Tunes will be cranking from 5.30pm, with rock outfit Coverlords set to take the stage at 8pm, followed by local rap geniuses SNAKEYES from 10pm, and then DJ Willy G who’ll close things out from 11pm.

But don’t go partying too hard. You’ll want some energy left for the official last day of the season. That’s right, the Grand Massif doesn’t officially close until end of day Sunday so you’ll have a whole other day to get up there and enjoy one final shred. Or if you’ve already packed the skis and board away then head up top anyway and enjoy the end of season fun at Lou Caboëns and Chez Georges. Lou Caboens will once again be putting on a grand lunchtime feast, not to mention live musical fun. Go say hi to Cedric, Winnie and the team from midday til 5pm.

It’s been a long standing tradition in Samoëns that the end of season lunch at Lou Caboëns turns into the end of season ‘soirée’, but this year the guys are passing the torch to Chez Georges who will be hosting the 2015 evening of fun and madness. Get yourself across the plateau and up to 1600 where Georges and his team will be serving pizzas, croziflette, soft drinks, not-so soft drinks and a whole lot of fun from 5pm til late. DJ David Guetto will be keeping the party pumping, and so you can really make the most of it a taxi service back down the mountain has been arranged for just 5 euros per person.

So there you have it folks: a whole lot of fun to be had before the winter season here in the Grand Massif is over. There’s certainly nothing quite like finishing on a high note, and well, this year the end of season festivities here in Samoëns are going off. If you’re lucky enough to be here right now then enjoy. For everyone else, thanks so much for visiting with us this winter season 2014/15. We can’t wait to see you all next year. No wait - we don’t have to. Summer is just around the corner after all! See you soon.