It’s official! The 2013 summer season is upon us and the weekend just gone was a sports-lover’s delight here in Samoëns. Some of the world’s best mountain bike riders were in town this weekend for Round One of The Enduro Series French Cup. Enduro racing requires a great deal of physical strength and fitness as well as technical skill. Riders complete stages – trail descents of varying degrees of difficulty; the objective being to finish each stage as fast as possible. The Samoëns event consisted of eight descents with the podium finishers clocking up an average of 1h43min of riding. Over the weekend I was lucky enough to speak with Commencal rider Remy Absalon, who won the overall series last year, and his team mate Nicolas Quéré. The guys really enjoyed the Samoëns terrain. “It’s such a well rounded resort,” said Nicolas, “It’s physical, technical and pleasant to ride.” Remy agreed, stating Samoëns as the Enduro resort. “There’s lots of descent, there’s good sections of pedaling, and the terrain is so variable.” Remy particularly liked the tree runs. “I ride some resorts where it’s all open - no trees. It’s all the same, but here is different. It’s interesting and enjoyable to ride. It’s fun!” This year was actually the second time Samoëns has hosted a round of the Enduro Series French Cup, and our resort was met with similar comments from riders last year about the quality of its terrain. 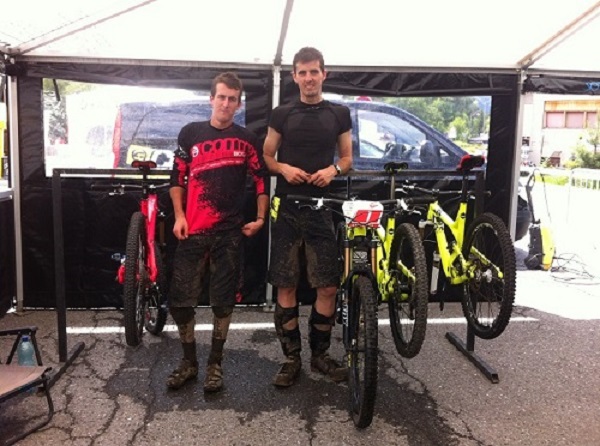 After another successful event this year (over 200 riders competed), it’s safe to say our little village has assured its place as a venue for future events. Pretty good considering only five years ago the lifts didn’t even open in the summer. Samoëns is definitely an up and coming downhill biking destination. Lifts will be open every day this season from 6th July to 31st August. 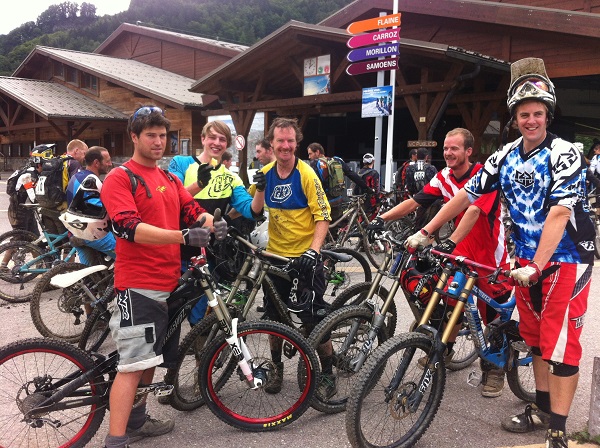 Local lads, Steve, Jamie, Nick, Kyle and Paul made the most of the Enduro Series weekend, Samoëns 23/06/13

This weekend was not all about the Enduro series however! For the first time, in what we hope will be an annual occurrence, the village was proud to present “Samoëns Trail Tour.” This trail-running event comprised of two grueling long-distance races. The 200 odd participants chose between L’Esprit Angolon, a 57km trail with over 4000m of elevation, or Le Tour De La Golèse, the 33km course with an elevation of approximately 2000m. 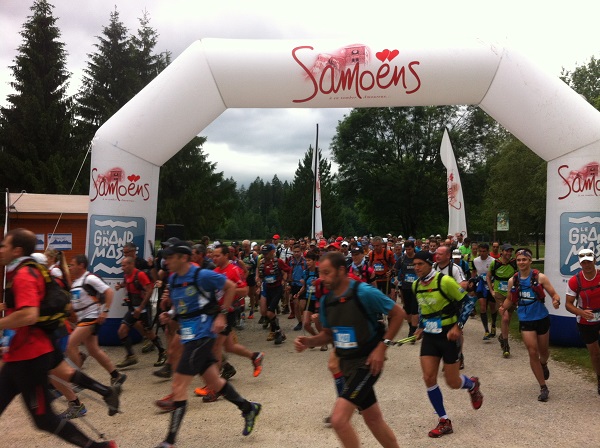 Alps Accommodation guests Valerie Rio and her husband and three friends all travelled from Brittany to compete in the event. Valerie has been a keen runner of trails for 15 years and told me that in a way the sport is what brought her and her friends together. When I asked Valerie how on earth one trains for this sort of event she replied, “In whatever way we can!” As well as jogging, Valerie enjoys cycling and aerobics classes. She said the best way to prepare however, “Is to just get a pack on and get out in nature for a walk and run whenever you can.” The tight-knit group of friends had been looking forward to the Samoëns event ever since hearing about it from a friend, and they assure me they weren’t disappointed. Despite the long distance and steep, challenging terrain, Valerie and her friends loved the course. They even found time to take some photos which I hope they will share with us soon on facebook. It was an incredible effort by all in the group, however; one member in particular deserves a special mention. Patrice made it into the top ten! He ran eighth place in his race. Well done Patrice! The event as a whole was a great success. Participants were clearly overjoyed with the terrain and there was plenty for spectators to do throughout the day. At the Lac Aux Dames, where the race began and finished, market stands were set up, refreshments were available and activities organised. This all made for a great way to pass the time until the competitors started to run on over the finish line, some four to ten hours later! 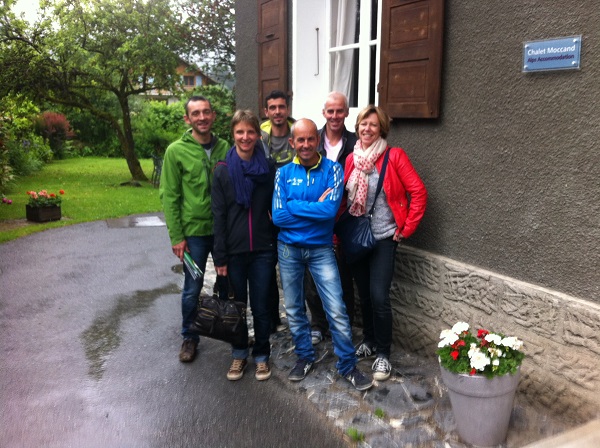 Apartment Moccand guests Patrick, Valerie, Patrice, Jean-Pierre, Olivier and Valerie were all smiles after a great weekend in Samoëns for “SamoënsTrail Tour”. Congratulations guys for your fabulous efforts in the race!

Congratulations guys for your fabulous efforts in the race! So, it was a very active weekend that got things rolling for the summer ahead. And there’s more to come on the sporting front. Next weekend (28-30 June) is the annual Pass’portes du Soleil, a cross county biking event with departure points within 20-30 minutes of Samoëns. The French Masters and Regional Cups for Downhill are being held in Morillon Mid July, and the EnviroTrek is returning once again on the 24th, giving participants the chance to try an entirely new sport. Plus there’s all the activities that abound every day simply because of our alpine environment: hiking, biking, climbing, rafting – the list goes on. If you’re a lover of sports then Samoëns is definitely the place to be this summer. See you soon! 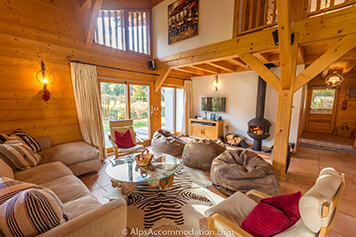 "A few steps from the center of Samoens! A mazot with a lot of charm! We recommend this rental!" Bruno, The Mazot, May 2021

"Very high quality chalet, the beds are of good quality and the chalet is well equipped. We enjoyed the fireplace! Thank you to the managers of the chalet to have moved so quickly at our arrival to provide us with the high chair for our son!" Le Gall family, Chalet Bleu, March 2021