You are here:
Home> Samoens> News> American Festival in Samoens 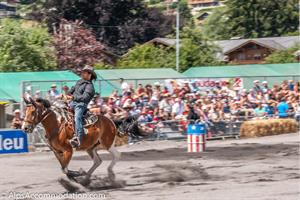 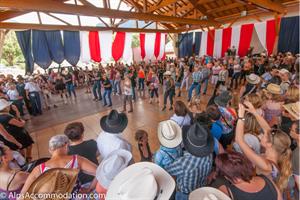 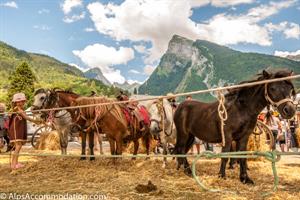 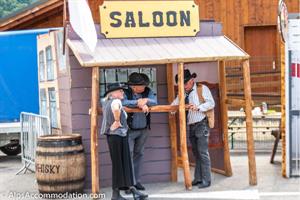 The Samoëns Amercian Festival was yet another great success this year as locals and holidaymakers alike flocked to the village centre and surrounds to enjoy three action-packed days and nights of all things America. It was the festival’s 6th year to Samoëns and I must say it was as fascinating as ever to see our charming and classically alpine little village transformed into a scene from the Wild Wild West!

There were cowboys (and gals) galore, some spectacular equestrian displays, and of course lots of toe-tapping, line-dancing musical fun for everyone. There were plenty of market stands selling token American pieces and produce dotted around the village. And even the local restaurants were getting in on the American action, trying their hand at some classic American fare like Kentucky-style Southern Fried Chicken!

And let’s not forget to mention some of the hot motorbikes and cars that were on show, many of the proud owners of which had travelled from afar to show-off their prized possessions. There were Harleys, Mustangs, Chevrolets, the biggest and shiniest Jeep Hummer I have ever seen, as well as a pretty impressive collection of classic military jeeps. There really was plenty to see and do and only smiles and cheers from the cowboy hat and boot wearing crowd that animated our streets all weekend long. It really was a fantastic vibe and one that’s set to continue as Samoëns plays host to some great events all summer long. Let’s take a quick look now at some of the events you can look forward to this summer…

Starting this Thursday 10th July, the Pépites Festival is back! Enjoy free, live music concerts each week by the village entrance, in the main square or even down at the lake. Kick starting this year’s program is the French (but very Irish influenced) group The Moorings who play at 9pm outside Aspen Bar.

Then this weekend get yourself to the slopes of Morillon for Dré dans L’Pentu, the first event in the Rhone Alps Downhill Mountain Biking Championships. The end of August will then see Samoëns playing host to an even bigger mountain biking event, this time the French National Cup in Enduro racing, which will be held the weekend of 30-31 August.

And of course next week France will celebrate its national holiday. Samoëns will be celebrating with a spectacular fireworks display followed by an open-air dance party on Monday the 14th July. There’ll also be a number of other events to enjoy in the valley from Sunday the 13th, including what is always an impressive and beautiful display down at Lac Bleu in Morillon on Sunday night.

So don’t miss out on what will be some great, fun times ahead this summer. Get in touch with the team here at Alps Accommodation. We’ve still got some great summer deals, including some last minute specials on some of our beautiful chalets and apartments. We’re sure to be able to help you arrange your perfect summer getaway. See you soon!